There is a place where you can dive amidst gardens of colorful soft corals in the morning, and then hike ancient pilgrimage routes amongst towering millennia-old trees after lunch. After breakfast, you can swim with giant grouper and turtles, and then after lunch, visit towering waterfalls while wrapping it all up with dinner with monks in their monastery high in the mountains.

The only thing as stunning as the geography of the land is the seascape that begins right at the shoreline. This profoundly spiritual place is also far off most international tourists’ radars, so there is a sense of peace and tranquility you don’t experience elsewhere. All this can be found just over an hour’s drive from a major international airport. No, this is not Bali. This is Wakayama; this is Japan.

White Sand, Dive Shops, and not a Foreign Tourist in Sight

Wakayama Prefecture is located just south of Osaka, with the principal city being about 30 minutes from Kansai International Airport. I had the privilege of doing a land shoot in Wakayama for ASIAN Geographic magazine in December 2018, and we focused on the UNESCO World Heritage Sites that are abundant in the area. I was blown away by what I saw and experienced, but there was one thing that left me feeling like I was missing something. As we drove around the coastline, I noticed how clean it was and the clarity of the water, but I saw something else, too—dive shops, a lot of dive shops. I’ve been diving for 20 years and in the dive media business for a pretty good chunk of that, but I had never heard of diving in this part of Japan. Okinawa, sure, but on the main island of Honshu, this far north? Never.

After that trip for ASIAN Geographic, in one of our post-production discussions, I asked about the diving, and the local tourism department thought that was something they might like to promote. I was asked to do a follow-up story, and this time diving was to be a part of it. So, after arriving in Osaka, we headed south to Kushimoto, which is about two hours south of the airport. This is a place of rugged coastlines, interspersed with some stunning beaches. Orange torii gates sit in the water in front of islands, and you get the feeling you are in a storybook version of Japan. But this is an older Japan, more traditional. As we hit the water for our first dive, I also discovered that it was an undiscovered diver’s paradise. 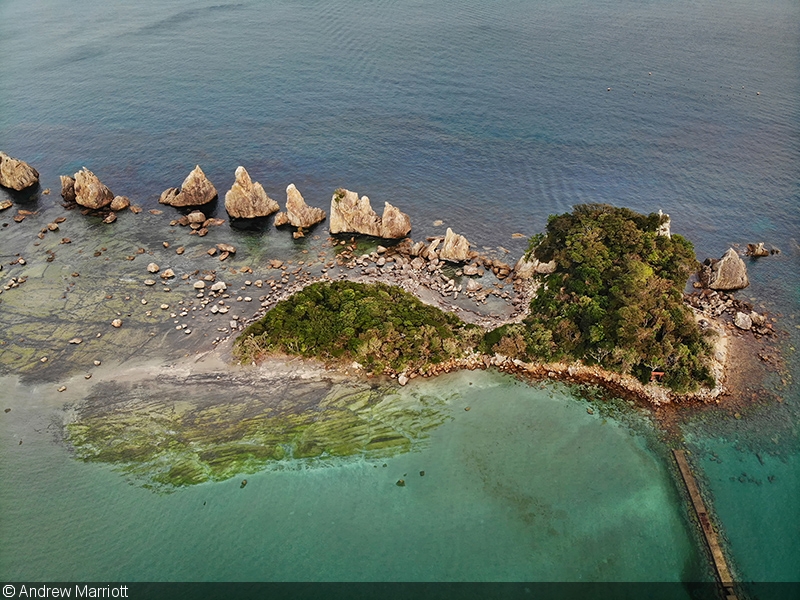 The coast of Wakayama is very rugged, and this is true underwater, too 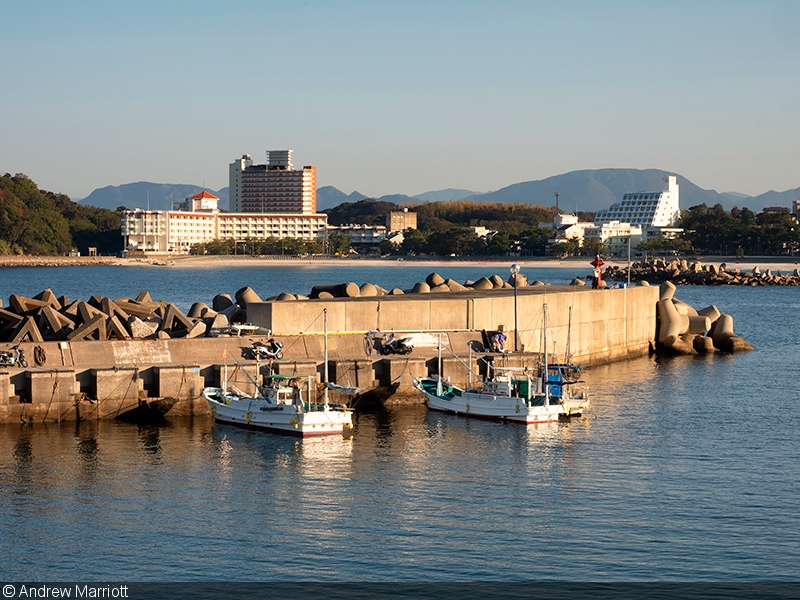 The beaches at Shirahama: This is the most developed area of the entire region

The first thing I noticed when I rolled off the boat was that the water was warmer than I expected it to be—though it still is not board shorts temperature by any stretch. The latitude here is very close to San Francisco, but the Kuroshio Current brings warm water up from the equator. In the summer, temperatures hover around 79°F (26°C), and in the winter it drops to 59°F (15°C). If you hop in San Francisco Bay in the summer, 59°F would be the warmest you could hope for!

For our first dives, we went looking for the giant grouper that make their home in this area. In the area we looked, the bottom was covered in big, dramatic rocks; it reminded me a lot of Lake Tahoe in California. Among these rocks were some beautiful patches of vividly colored soft coral. I saw dozens of reasonably large groupers, often in groups. Most of these were in the three-foot-long range. My guide was disappointed we didn’t see any of the big ones, but that was probably my fault, as I kept fixating on cool things with my camera. I think we only did about 20 percent of the planned dive area! 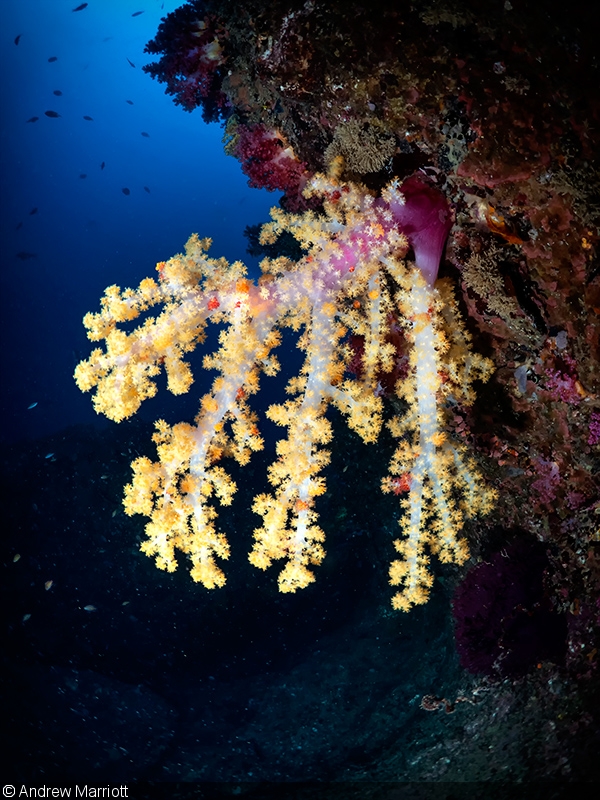 I missed the best part of the dive because I got fixated on the soft coral! 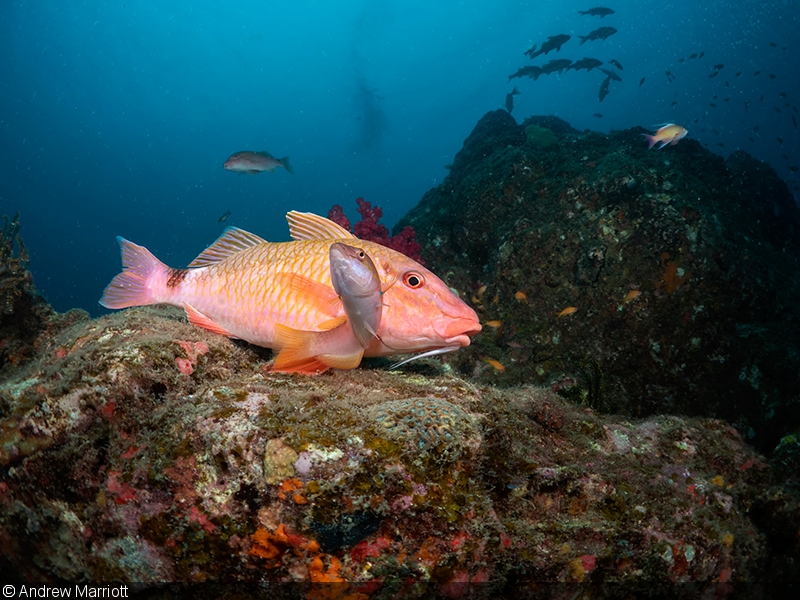 That afternoon, we went back out in a torrential downpour—it was the peak of the rainy season—and went looking for pretty colors. I had mentioned how barren the rocks were in the morning, and I think the guide wanted to balance things out. Wow, did he ever succeed!

The second dive took place around an underwater hill, and we went all the way around. The entire area is full of drop-offs, boulders, swim-throughs, and plenty of marine life. There was one place that captured my attention, and that was an impressive cliff and overhang that stuck out into the current. Turning my lights on, the colors just exploded. Pink, red, orange, and yellow soft corals were abundant, and schools of anthias, fusiliers, damselfish, and even a couple of turtles kept us company. The scene was much more reminiscent of a dive in the Philippines or Micronesia, than that of the rugged west coast of North America—which is what I expected.

The whole place is a fascinating blend of the colorful life from the tropical seas and the bizarre creatures of the cold northern waters. It turns out that this is the northernmost tropical reef in the world, at least according to the dive operators there. Huge cold-water lobsters that numbered well over 100 sat next to nudibranchs and whip coral shrimp that I regularly find in places like Saipan. In one moment, I felt like I was in northern California and the next in the Philippines. The experience is almost surreal, and there is nowhere else I know quite like it. 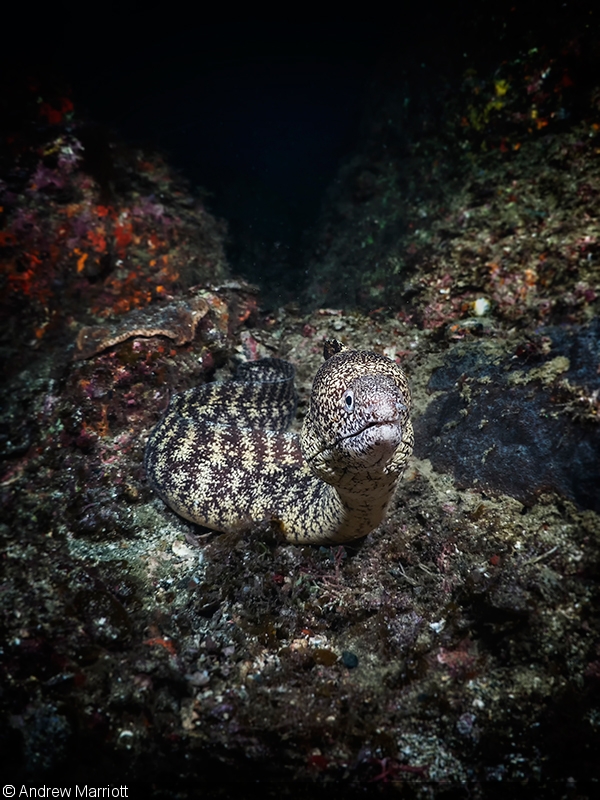 I was shocked at how many eels were out swimming, and they were very relaxed 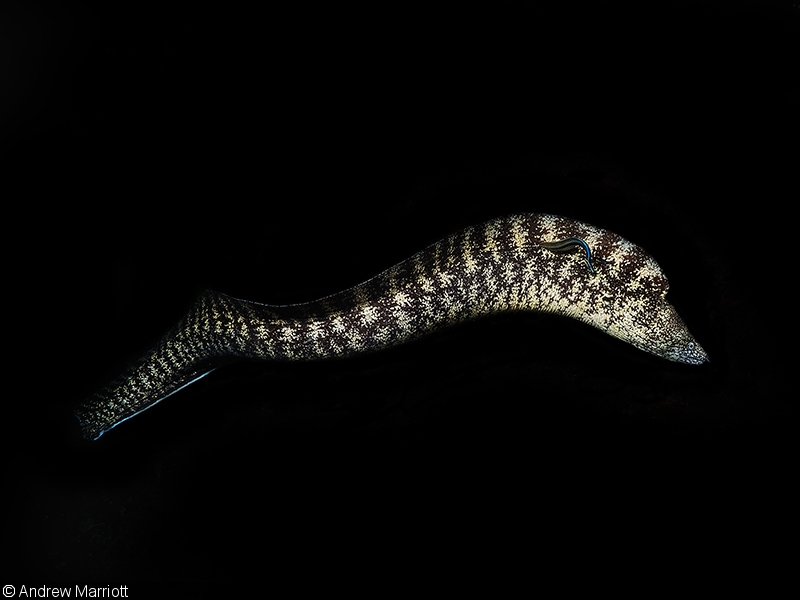 I love eels, and I was not disappointed by the number and variety that I found

After wrapping up my diving, we did a land shoot for the next five days. The combination of the land and water is what makes this place so unique. We went to the home of soy sauce, had beers on a perfect white sand beach, went white-water rafting on a wooden raft that you had to stand up in, and saw some stunning waterfalls.

But all these activities paled in comparison to the UNESCO World Heritage sites. I was privileged to shoot a festival where massive torches are carried down ancient stone steps from a temple in the clouds down to the foot of the tallest waterfall in Japan. We followed that up with night walks in a 1000-year-old cemetery high in the mountains, where an ancient monk has meditated for the last 800 years. That night I went to sleep listening to the bells of the temples, and I awoke to the monk’s morning chants. 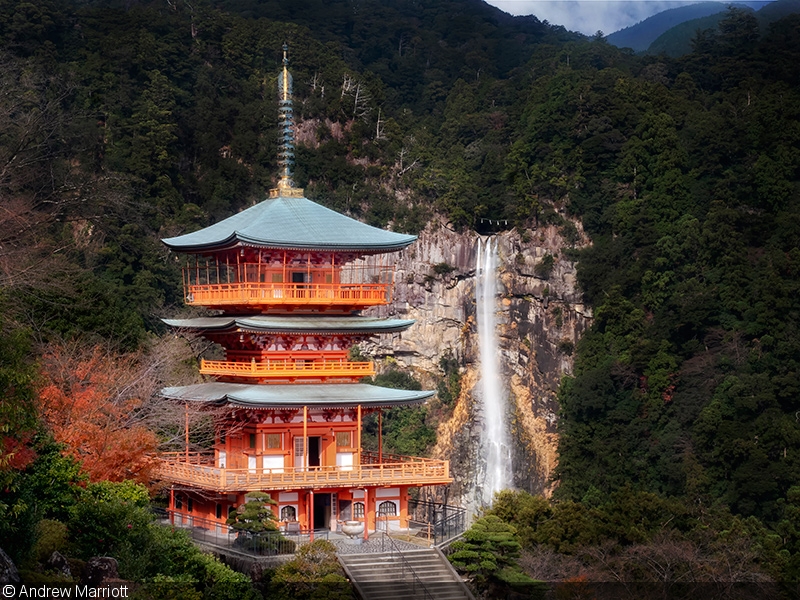 The Nachi no Taki waterfall is breathtaking

When I described this area as reminding me of Bali, I was serious. The diving in both is excellent if a little different. The land activities and cultural activities are very similar, and the feeling of an ancient way of life permeates. But there is one huge difference: the crowds of tourists. Wakayama is quiet and still very local; there are no busloads of tourists swamping the sites. I went in peak season, and I ran into only a few foreigners; the rest of the tourists were older Japanese coming on weekend trips from Osaka and Kyoto, which is only two hours away by train. I have also been there in the middle of winter and had the entire place to myself. Turns out there are still undiscovered paradises in the world—I just never expected to find one in the middle of Japan. 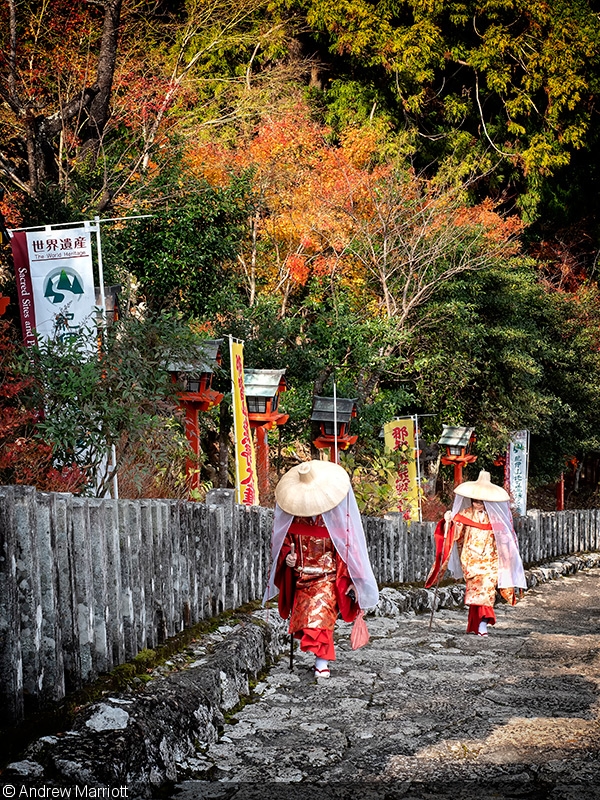 Pilgrims on the Kumano Kodo, a UNESCO World Heritage trail 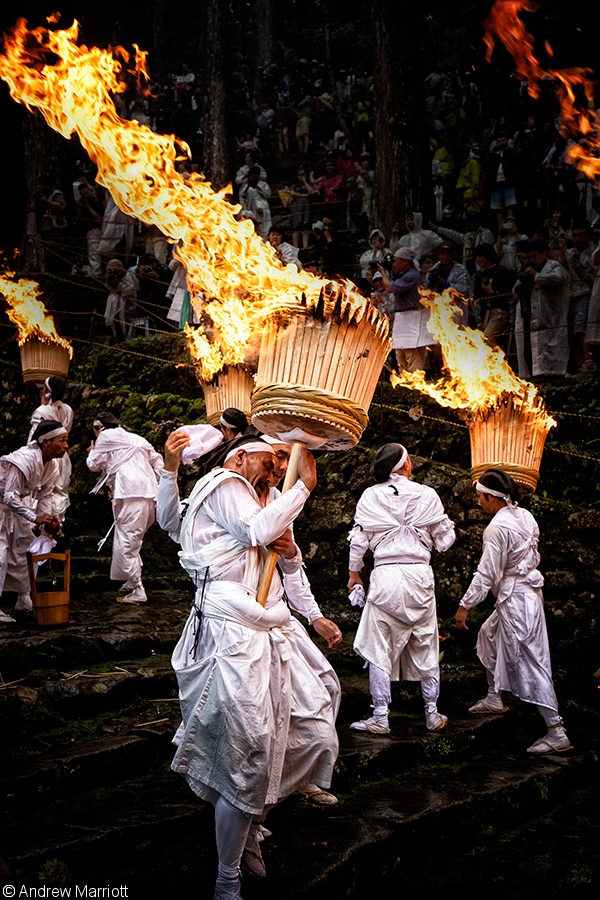 Fascinated? Check out our LIVE! Global Webcast on Wakayama: Diving the Land of Water and Fire on Friday, 22 May 2020, at the following times: Don’t miss out on this exciting talk – See you there!